If you are a Veteran or know a Veteran that would like to fly with us, or if you would like to apply to be a Gaurdian, please down load and complete the appropriate application here.

Well, we can all agree that 2020 was a year filled with sadness, disappointment, trauma, and fear, BUT we’ve stuck together, helped where we could, and remained hopeful. And now, we have a brand new year ahead of us, and the Blue Ridge Honor Flight family is ready and dedicated to making 2021 a great one for our veterans. Here’s a few things we have up our sleeves:

Operation Yard Signs: We’re working up a special sign that the BRHF team will be delivering personally to our veterans getting ready to take a 2021 flight!!

Spring ZOOM gathering: Crank up your computers and pull up the Zoom!! Don’t have Zoom? We can help with that too because we want to “see” you and connect you with the leadership team and others you’ll be traveling to DC with in the Fall. It’s gonna be a party on line, so get ready!

Summer picnic: Get your vaccines, because we’re taking the party outdoors and in person (with all appropriate precautions) this summer. Great food, music and connection will be served up to pump you up for what’s coming next!!

FLY IN THE FALL!!!!!! Have hope and get excited because fall is just around the corner, and Washington, D.C. is calling your name! With safety as our #1 priority, we have begun our flight planning to get back in the air. It promises to be the trip of a lifetime, and we can’t wait to take you. Let’s do this!

His entire life, Jeff Miller has liked nothing better than sitting at the side of a World War II veteran listening to stories about the war and life after. It came naturally as the only child of a Navy veteran who served in the Pacific and nephew to an Army Air Corp B-24 bomber pilot who lost his life in 1944 during a bombing run in Czechoslovakia. A big part of Jeff’s intrigue with the war revolved around a trunk filled with military letters and documents regarding that uncle's service.

“My mother lost her oldest brother in the war and he had made that trunk for her," Jeff said. "I went to the trunk and opened it and found letters from my uncle, the flag from his casket, letters from the military commander and my uncle’s flight log." Jeff’s dad died in 2003 and it was after his mother’s death in 2006 that Jeff was able to view the contents of that trunk. He also found a telegram informing the family of his uncle’s death. His mother was only 17. But, perhaps the most amazing thing he found was his mother’s diary that she had written in every day while her brother was away at war. Now Jeff had his uncle’s flight book, where he had recorded not just a flight record but also his daily activities, and he could compare that to his mother’s notes made stateside. It was fascinating information.

Brothers Like These Helps Vets Heal through Arts and Creative Writing

Steve Henderson,  Vietnam War vet and Marybeth Burns,  board member of the Blue Ridge Honor Flight, explain how Brothers Like These provides healing for vets through the arts and creative writing.  Check it out here.

(April 30, 2020- Hendersonville, NC) -  Blue Ridge Honor Flight is carefully monitoring developments concerning Coronavirus (COVID-19) and has had to postpone the flight scheduled for May 16, 2020,  but the organization is still at work in the community.

“We are partnering with local restaurants to prepare meals and goodies and then we’re delivering them to those working the front lines…. making sure to take all necessary safety measures to protect them and ourselves,” said BRHF founder Jeff Miller.

If you’d like to support their efforts and contribute to the cost of meals, please send your contribution to : BRHF, 423 N. King Street, Hendersonville, NC 28792 Attention: Jeff Miller. In the memo line, please write “meals”. 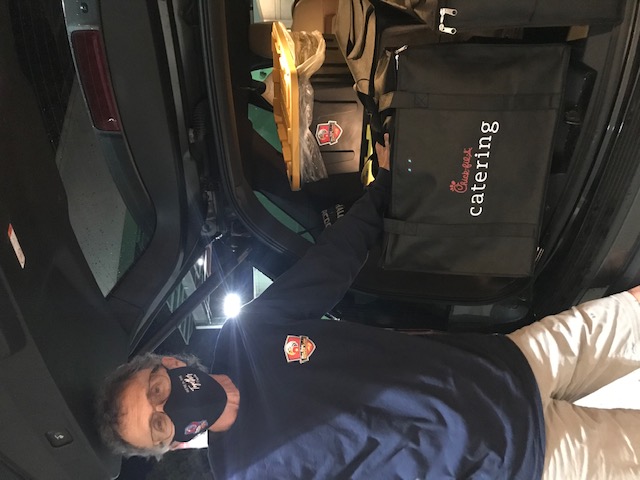